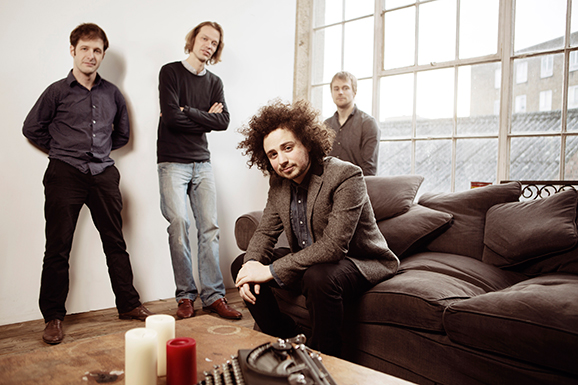 Kairos is an ancient Greek word meaning the right or opportune moment – the supreme moment. Kairos 4Tet was born out of a desire to explore times past, present and future, creating music with a sense of space, between the competing worlds of written melody and in-the-moment improvisation.

Fronted by saxophonist and composer Adam Waldmann, Kairos 4Tet are fast becoming a cornerstone of the British jazz scene. They are one of a kind – bridging the gap between classic and contemporary; the jazz idiom and the lineage of song; ferocious grooves, burning improvisations and melodies that linger long after the music stops.

A former student of Julian Arguelles and Yuri Honing, Waldmann has worked with the likes of Alicia Keys, Mark Ronson, Mark Guiliana, Alan Hampton, Paloma Faith, Tinie Tempah, beatbox sensation Shlomo, The Sam Crowe Group, Will Vinson, Jim Hart and Dutch band FinnSilver amongst numerous others. In 2010 Waldmann made the leap to band leader and  released Kairos 4tet’s debut: Kairos Moment, an album that marked him out as “a powerful new voice in British jazz” (BBC), “ a precociously talented composer and player” (All About Jazz) and as a “young master in the making” (Time Out). In 2011, their second release, Statement of Intent was voted no.2 in MOJO Magazine’s albums of the year and led to the MOBO Award for ‘Best Jazz Act’.

Their third album ‘Everything We Hold’, and first outing on the renowned Naim Jazz label, takes Kairos in a new and unexpected direction. In a bid to push the boundaries of his own creativity Waldmann explores in great depth the art of song, paying homage to some of the relationships he holds dearest. Social and political concerns remain a strong influence and The 99 suite that frames the album in recognition of The Occupy movement, serves as a reminder of connectivity and kinship on a wider scale. Stand out vocals come courtesy of Swedish chanteuse Emilia Mårtensson, acclaimed neo-soul icon Omar (who first met the band at the 2011 MOBO Awards), and husky voiced, emerging Irish singer-songwriter Marc O’Reilly.  Their vocal talents appear in unlikely and exciting new contexts, incorporated seamlessly into the quartet’s unique sound world, whilst adding another intriguing dimension. Extending this further is producer/arranger extraordinaire Jules Buckley (Anthony and the Johnsons, Michael Kiwanuka), the founder-conductor of the Heritage Orchestra, and principal guest conductor with Holland’s Metropole Orchestra. With the addition of strings, harp, harmonium, bass clarinet, glockenspiel and French horn, their sonic landscape is deeper and richer than ever before.

Kairos 4tet’s secret weapons on ‘Everything We Hold’ are the mesmerising lyrics of writer, filmmaker and actor Rupert Friend (Pride & Prejudice, Young Victoria, Homeland) an old and close friend of Waldmann’s who also directed a unique and stunning music video for ‘Song For The Open Road’ featuring Omar. The album has gone on to recieve 4 and 5* reviews across national/international media and featured heavily in ‘Album of the Year Polls’ with The Observer declaring it the ‘Hidden Gem of 2013’.

Whether it’s ‘Home to You’ – an unashamed love song; ‘Narrowboat Man’ – an ode to friendship; ‘Ell’s Bells’ – a lullaby for Waldmann’s niece or one of the instrumental dedications to his band mates, the Kairos 4Tet trademark qualities remain. At the very core of each song is a lyrical, melodic quality and exceptional inventiveness. ‘Everything We Hold’ showcases the compelling rapport of a working band who have long been fine tuning their intricate dialogue on Europe’s top stages, at the height of their powers. With Waldmann, a graceful player, described as “one of the most distinctive saxophonists in the UK” (Manchester Evening News) on breathy tenor and quirky soprano, bassist Jasper Høiby’s muscular low ends (Phronesis, Shai Maestro), Ivo Neame’s dazzling piano (Cinematic Orchestra, Marius Neset) and Jon Scott’s hypnotic drumming (Mulatu Astatke, Dice Factory) the quartet allow the warmth of their communal spirit and of the now improvisational edge to shine through.

“Under the leadership of saxophonist Adam Waldmann, Kairos 4Tet have found a melodious medium between traditional Jazz and the forward facing nature that typifies so much young British Jazz. The band’s compositions are open and accessible, but there’s no compromise when it comes to intuitive, intelligent playing and adventurous arrangements” THE MERCURY PRIZE

“(Ronnie Scotts) …the first event in the current Brit Jazz festival to sell out, and it didn’t disappoint…The acclaimed Kairos 4Tet are led by composer-saxophonist Adam Waldman. His compositions create distinct musical atmospheres within seconds: they’re not like conventional jazz “heads”, but closer to classical studies, with a touch of the chiming, swirling epics of Esbjörn Svensson” * * * * The Guardian

” (The Sage, Gateshead) Essentially an English melodist who slots into a lineage that includes Surman, Sulzmann, Argüelles and Ballamy, Waldmann also comes with one or two unique selling points of his own. His frame of reference naturally encompasses the ubiquitous influence of Coltrane and the wistful impressionism Garbarek’s great quartets with Jarrett and Stenson, but a canny knack for tapping in to today’s beats and grooves gives his music a distinctive and thoroughly contemporary edge…Yet unlike many ensembles with crossover potential, I sense very little compromise within the music of Kairos…their presence on stage was little short of magnetic” Jazz Journal

“(The Bimhuis, Amsterdam) Waldmann is a very skillful saxophonist who’s game is the connection with the other musicians. The group as a whole has a fantastic clear sound and their playing is inspired…Pure fun to watch and listen to…It is a new jazz trinity attractive to younger generations” Written In Music

“… virtuoso musicianship, breathtaking compositions and ensemble playing worthy of the great concert halls. The excellent Kairos 4tet blew through Oxford and confirmed why they are one of the most in-demand of the newest wave of jazz groups emerging in the UK.” ***** The Oxford Times

“Kairos 4tet play complicated yet ultimately melodic modern jazz with a huge amount of improvisation developing between the quartet members…Waldmann, whose evocative gutsy sound emerges from the heart of the Wayne Shorter tradition…A stimulating showing” Marlbank

“(Brecon Jazz Festival 2014) Kairos 4Tet create rich and exciting jazz that’s confident and melodic. A great deal of attention to detail, intricate work and improvisation has helped to make their music joyous and spellbinding. This was a gutsy, expressive and distinctive performance.” AAA Music

“This MOBO award-winning outfit can only be described as spellbinding, the complex improvisation merging effortlessly with more accessible melodies, such as a beautiful lullaby written by Waldemann for his niece. Swedish singer Emilia Martensson lent her wistfully ethereal voice to several numbers, while every gripping solo, from Waldmann’s soaring sax to Scott’s joyous drumming, were heavenly to behold.” The Oxford Times

About ‘Everything We Hold’

“Bursting with dreamy, hummable melodic themes… this is easily Waldmann’s best to date…hangs together beautifully in the way albums were always meant to” Jazzwise ****

“Adam Waldmann is no respecter of boundaries…Unleashing London soul star Omar on the folksy Song for the Open Road proves a masterstroke. Waldmann’s playing is joyous”  THE OBSERVER ‘Hidden Gem of 2013’

“Waldmann’s sensitivity to jazz dynamics and potential for improv remains sharp, as is his own sax-playing…Jules Buckley adds rich strings arrangements…very accomplished”   **** THE GUARDIAN

“Musically complex but melodically irresistible, the album is a winner from first to last…Waldmann plays with such lyrical expressiveness it’s easy to forget he’s not a vocalist too” (UK Metro)

“Everything We Hold is the sound of a band building on earlier successes, a beautifully-crafted work that takes the quartet’s sound onward and upward…full of great ideas, brought to fruition by great musicians.” All About Jazz

“a clever and sensitive record” The Independent, ****

“..a deft, clever and engaging piece of work…channeling the spirits of Wayne Shorter, Nick Drake and Astor Piazolla into a compelling, haunting hybrid… moment(s) of exquisite beauty, a rather special piece of tightrope walking from Waldmann” Music OMH ****

“Kairos have created an album that seems set to increase their across the board appeal but without in any way compromising their artistic or political integrity. It’s a pretty impressive feat and one that seems guaranteed to ensure that their star will continue to rise. ” ****1/2 The JazzMann

“it’s the attention to fine detail which lifts this engaging recording to a higher level…sure to garner a wider following, whilst continuing to enthrall current audiences.” LondonJazz

“there are so few new jazz bands writing complex vocal tunes and this is the band that’s doing it, and they’re doing it so well…vocal melodies are beautiful as are the lyrics. Just Beautiful” Jamie Cullum

“all the complexity and improvisational intent of a first-rate jazz ensemble, but the group’s leader, saxophonist and composer Adam Waldmann, is clearly interested in more… It’s a fine balance, but Waldman’s deft arrangements of his own tunes, with lyrics by actor Rupert Friend, strike it perfectly” The Irish Times ****

“Everything We Hold is filled with these solid melodies and compelling hooks, the playing is exemplary, and the whole thing has a beauty and accessibility which should bring it a wide audience.” The Jazz Breakfast

“Listening to the whole record in its entirety is a pleasure, so consider this my tip for the next set of Mercury Prize nominations.” Jazz UK

About ‘Statement of Intent’

Statement of Intent melds lush classical-ish harmonies with adrenalised improv, shimmering beats and purposeful grooves to bewitching effect…This is smart music that isn’t trying to impress but does simply by its sheer quality, enticing you into the warmth of Waldmann’s world. Time Out ****

…this superb group are terrific players inspired by thoughtful compositions. Waldmann s themes have a strength and clarity, underlined by his own calm, understated delivery. Mojo ****

A formidable yet flexible unit, Kairos 4tet make free flowing contemporary music that packs melody, rhythm and high flying improv into a tightly wound whole. Hence you re as likely to leave whistling one of their many refreshing tunes as you are to be impressed by the group s compelling interplay and imaginative solo skills. Jazzwise ****

…full of energy, inventiveness and melody, demonstrating a maturing musical sensibility, and placing the band fairly and squarely in the top flight of the UK jazz scene….Statement Of Intent is exceptional.” AllAboutJazz

“…a superb group whose increased solo strength continues to be reinforced by intensely focused interplay… remains fresh and, for all its contemporary feel, accessible.” The Irish Times ****

“Waldmann’s troupe have resisted the zeitgeist to make music that is resolutely acoustic and unapologetically lyrical….Waldmann has a melodic gift as a writer and considerable grace as an improviser”  Metro

“Adam Waldmann, dedicated to the proposition that contemporary jazz can be cerebral, peaceful and yet still swing…a classy project whose time has definitely come” The Evening Standard

“Striking compositions, tradition-rooted and restlessly contemporary group-sensitive and freewheeling jazz improv with an elan that’s likely to put it on a lot of peoples ‘rising UK stars’ list this year” The Guardian ****

“Fast rising young ensemble… a fine band who reflect Waldmann’s sophistication as an improviser brought the set to a rousing clamour”. Guardian Live